EKSG APPOINTS DINABI FOUNDER AS MEMBER OF COMMITTEE ON OGP. 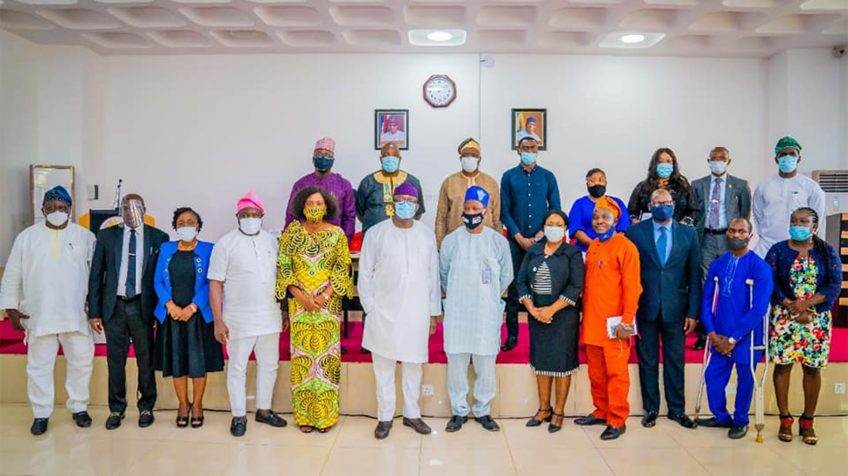 EKSG APPOINTS DINABI FOUNDER AS MEMBER OF COMMITTEE ON OGP.

The Ekiti state governor, Dr John Kayode Fayemi on Monday has appointed the Executive Director of DINABI, Olajide Funso a person with physical disability into the State Steering Committee on Open Government Partnership. In a brief ceremony on Monday 20th September, 2020 at the Governor’s office in Ado-Ekiti, the governor reiterated his administration’s commitment to transparency, accountability and inclusion of all stakeholders into all government programs and policies.

Fayemi said the Ekiti state government signed into the OGP last year and became the first state in the southwestern part of Nigeria to sign into Open Government Partnership while also stressing the fact that the OGP initiative was in consonance with his restoration agenda as clearly spelt out in the five pillars of his administration.
The committee is to be co-chaired by the Commissioner for Budget, Hon Femi Ajayi (Representing Government) and Professor C.T. Oluwadare (representing Civil Society) while also having Professor Bolaji Aluko, Hon O’Seun Odewale, Dr (Mrs) Abimbola Solanke, Hon Biodun Oyeleye, Olajide Funso (DINABI Founder), Bukola Adedeji (LAPDO), Abimbola Aladejare (NIGWAD), Chief Kola Akosile, Barr. Rita Ilevbare Esq. and others as members.

Members of the steering committee, according to the governor were selected from civil society organizations, professional bodies, youth parliaments, public service and other interest groups.

The Executive Director of Disability Not A Barrier Initiative (DINABI), Olajide Funso while speaking with journalist after his inauguration commended the governor for prioritizing inclusion and openness in governance. He said OGP will bridge the gap between government and its citizens thereby leading to service delivery. He further called on the state government to appoints more persons with disabilities into appointive positions in order to boost ranking and economy of the state.

Open Government Partnership was launched in 2011 with eight (8) founding member government. In July 2016, Nigeria through the efforts of Open Alliance joined the partnership as 70th member country. In the same vein, Ekiti state government also applied for membership of the OGP in October 2019 and the application was approved.